I would like to know if there is any other profession which is capable of bringing about a Pavlovian response in a toddler.

That's where we found ourselves nine years ago. While Doc H's call schedule is much lighter now (he worked hard over the years building his department, hiring more partners and developing a cross-coverage call program), back then it was just him and one other doc. Before that, he was flying solo. Yes, that translates to on-call 24/7. Every day. Every month. Sounds enticing, doesn't it? Night after night after night...he was responsible for every urgent case (within your specialty) that came through the door on a gurney.

By the tender age of three, our Little Buddy had learned a Pavlovian-esque response to Doc H's pager. The first time I noticed it we were all sitting around the breakfast table on a bright, sunny, late summer, weekend morning. The kids were in their pj's slurping away on pancakes drowned in syrup and Doc H and I were pounding the coffee as we usually do. Then it happened. The ear piercing beeps broke up our nice little family breakfast. As Doc H stood up from the table to grab the phone, it happened. The cutest little toddler hand - still plump with baby fat - knuckles are still just dimples - immediately shot up in the air as Little Guy enthusiastically opened and closed his hand (his version of a wave), smiled, and said, "Bye-bye, Daddy! Bye-bye, Daddy!" 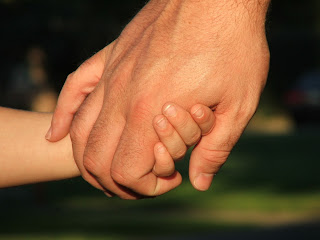 It was bittersweet. Little Buddy was (and still is!) such a cutie and just full of love. He held no resentment that Daddy had to go (that came from his older sisters who had refined the art of Daddy guilt trips). For Little Buddy, it was just a matter of fact and he was going to send Daddy off to work with a smile.

I tried to explain to Little Buddy the beeps did not always mean that Daddy had to go, but the news fell on deaf ears. To Little Buddy beeps were the stimulus which brought about his conditioned happy and loving goodbye response.