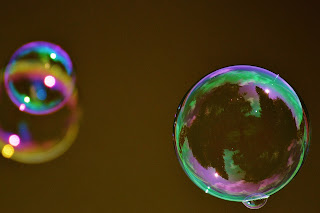 I'm thinking of bubbles. The kind children blow. Some are big, some are small. Some will last an incredibly long time. Some will pop before they are even completely formed. Bubbles are incredibly fragile and fleeting.

This morning my face hurts. I wish I could tell you it was from laughing, but sadly no. Last evening, I learned our dear, kind neighbor and friend passed away at lunchtime. I'm not sure it should be called "passed away". That term conjures images of someone, well into their prime, slipping off to another unknown world while sleeping peacefully in their bed. No, Jerry just flat out died. Jerry collapsed in his driveway while talking to another neighbor who said he looked as if he were dead before he hit the floor. Shocking, stunning, and numbing.

I received the news first and immediately dialed Doc H on his cell phone. He came home as soon as he could and asked if I had called Jerry's wife, Melinda. I had not. I was conflicted about calling. Would it be too soon? Maybe she was too distraught to talk? Maybe her phone was ringing off the hook and she really didn't want to talk about it anymore? Maybe I should give her some time? Maybe she wasn't ready to talk? Maybe I should give her some space? What could I possibly say that wouldn't sound trite or stupid on such a horrific occasion? Paralysis by analysis.

As soon as Doc H heard me say "No, I haven't called, yet" he immediately, instinctively and without thought dialed her number. I was so impressed how he could just pick up to dial and know exactly what to say and how to say it; asking if the news was true in a caring and non-nosey manner. He expressed our sympathies in a loving and non-corney manner. "How does he do that?" I thought to myself and then it was clear...his job.

Sunday, Jerry knew I was home alone. He came over to invite me to watch the Academy Awards with him and Melinda at their place.
Monday, Jerry phoned me to ask me if I needed help with anything in our new place. We had a lengthy conversation.
Tuesday, Jerry was dead.

Today, I'm seeing life as bubbles....floating, fragile, fleeting. I suppose we all are just living a bubble life. Let's try not to forget that.