Hey Everyone!
While I'm flying home from a crazy week of mai tai's and pina colada's, check out this guest post by The One with the Red Stethoscope. She is a relationship advice columnist turned medical student. She blogs about it all! I know once you poke around her blog, you'll want to follow along with her!


Don’t Waste Your Time on Cute Underwear, You Won’t Need It! 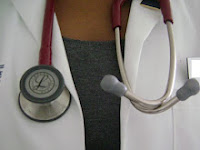 You can read more at The One with The Red Stethoscope
Posted by Your Doctor's Wife at 7:30 AM