Tell Me About Yourself Award! 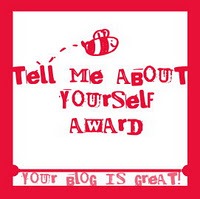 I was a little hesitant to participate in this fun award in order to preserve my anonymity, but I have had some time (okay, more like two months) to ponder it and decided I should just do it!

A BIG thank you to Brandi over at Yee Wittle Things for the nomination. If you haven't visited her blog you really should. She offers a mix of personal stories, photos, and reviews. Given that I have been trying to make a more conscience effort to support eco-friendly companies, I especially appreciate her reviews of green products. What's that you say? You love give aways? Then Brandi's your gal! Like I said, she's got it all going on! Go check her out!

The rules are simple.  Tell 7 things about yourself that would be found interesting.  Then send this to 7 bloggers that you nominated.  Remember, only participate if you like, it's all in good fun :)

7 things about me that I haven't already posted on here before....(this will be easy!)

1.  English is not my first language. Yet, I cannot speak my native language. I understand it fluently. When I went to pre-school, assimilation (not diversity) was embraced. If I must speak my native tongue, I sound like I'm speaking underwater. It's embarrassing.

2.  If I could, I'd be a life long college student, because I love being in the classroom...not for the parties...really...I swear on my uncle's cock fighting chickens back in the home country.

3.  In case you're wondering, I am American. My parents immigrated here legally. I don't think I could ever move to another country away from my family (well, they each had at least one family member here. That's how they had sponsorship). I am still bewildered over how they survived the journey and actually stayed.

4.  I was a cheerleader in junior high and high school. It still comes out at the kids' games. Sometimes I just can't help myself and I blame it on my parents. They'll both yell and scream during their games, too. Once, after a game, D3 told my brother she could hear her grandparents cheering while she was on the field and it was sort of embarrassing. His reply? "What? Hey, at least now they're cheering in English. When I was playing, they'd be cheering in Spanish! THAT'S embarrassing!"

5.  My Doc Hubby makes the best darn margaritas in the WORLD! For that reason alone, I would never leave him.

6.  I was asked to prom by a classmate. I declined his invitation. He went on to win a super-large, national modeling competition and national campaign for a large chain of stores. Everywhere I went for a year, I would look up and see him staring down at me from a large billboard.

7.  My very first car was a Honda. One day I was driving to school in the morning and noticed smoke emanating out the back of the car. I pulled over to a pay phone and used my emergency dime to call Dad. He asked when was the last time I put oil in the car. Oil? Who ever said anything about oil? Gas, yes. Oil, no. Per his instructions, I immediately drove to a auto supply store. Even though I was dressed all cute in my cheer uniform, none of the male employees would help put the oil in the car. I asked for a funnel. The gave me a huge funnel; one which would never fit my oil hole. Never mind! I went to another pay phone and called my high school sweetheart who was a year ahead of me and in college playing ball... so he was home asleep. I told him I couldn't find a funnel small enough to get the oil into my car without spilling it all over the engine. Sleepily, he told me to come over. I did. He walked out in a thin robe and crossed the crunchy, frozen lawn in bare feet. I popped the hood. I showed him the funnel. He couldn't believe I couldn't get that to fit the oil hole. I said I couldn't. We bickered. He said, "show me". I pulled out the dipstick and showed him how small my oil hole was. I couldn't understand why he was doubled over in a fit of laughter. As I watched him remove the large and clearly marked oil cap, I knew it was a moment I would never live down.

Here are some great blogs that I'm nominating:

1. The One With the Red Stethoscope
2. No Drama Step Mama
3. Natural Blonde
4. Life with Twins & a Drama Queen
5. Flats to Flip Flops
6. Just Another Tired Mommy
7. This Little Light

I enjoy so many blogs and these are just 7 of them.  Thank you again Brandi!!!

I hope you all have a fabulous weekend!