Play It Again, Sam, Sunday: How My Father Became a Doctor at 65

In honor of Father's Day, I'm re-posting this story highlighting my father.

My father became a doctor after retiring from high tech at the age of 65. Incredible, right? Well, let me tell you how he did it.

As retirement was approaching, my father had to make some decisions with regards to healthcare and insurance. He researched and completed his due diligence in choosing the right Medicare program for himself, but decided it would be wise to have additional medical coverage.

He questioned me about our coverage. Working for a hospital, Doc H has excellent medical benefits. It even covers parents and in-laws. Upon hearing this news, I swear I saw my father float up off the floor and reach a nirvana I had never quite seen in him before.  He signed up for coverage under Doc H's policy faster than you can say "ganglioneuroma".

A few weeks later, he received his insurance card and immediately made an appointment. He was actually giddy to go to Doc H's hospital for his appointments. He  calls me every time he has an appointment to ask if Doc H will be in the OR or clinic. He wants to know if there is any possibility he will bump into him in the hospital corridors. The hospital is a busy place with tons of people walking, running, wheeling around. The likelihood he will ever run into him is slim. I've told my father this time and time again, but he still calls and asks every. single. time.

Now would be a good time to paint a picture in your mind of my father. My father is a kind, family man with an incredibly naive sensibility about him. He (legally) immigrated to this country in the sixties from South America and somehow, despite the foreign land and foreign tongue, together with my mother, managed to raise a family and send us kids to private school. Sometimes, I have to think his naivete worked to his advantage in life. Sometimes it's better not to realize what's going on around you. You know, the "ignorance is bliss" mentality. 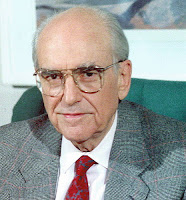 Physically, my father is a man of smaller stature. Maybe 5'9" in height and a slim build. He actually looks something like this....

He called me after his first appointment.
DAD: Tell Doc Eche to call me when e can, okay? I, uhhh, have some questions dat I nee to as'.
Me: What about?
DAD: Aiyyyyyy.... nat'in really. I jus ave question bout dese papers da doctor gava to me.
Me: Dad, didn't the doctor explain everything to you?
DAD: Aiyyyy...ja, but steel, I wan' to talk to Doc Eche. I come to da house when e is done operatin' with dese papers I ave. I wan show em so e can splain dem to me.

When my father's  insurance card arrived in the mail it looked just like ours. Now, you may think all insurance cards are the same (with the exception of the name and account number, of course). Not true. Our cards are the equivalent of an American Express Centurion (formerly the "Black") Card. When we check in with the receptionists for our appointments, they immediately know we are either a doctor or the family of a doctor. I guess I don't look like a doctor, because every time I show up for an appointment, I am questioned by the receptionist. I politely confirm her (or his) suspicion is true; I'm not the doctor in the family. I'm merely the doctor's wife.

Later that night, Doc H came home to find my father waiting for him at the dining room table, with all the papers his doctor sent him home with. Doc H looked them over and assured him everything looked pretty good and further explained the test results, what they meant, and how his meds have been adjusted based on these new figures.

Doc H is perplexed and somewhat disappointed the doctor didn't take the time to better explain the tests and medication changes to my father.

DocH: Didn't Doc X go over these with you?
DAD: aiyyyyy.....jes, but, well....juo kno, e use all dese big words, dat I don rehconize, jou know?
DocH: (knowing full well my father understands english almost perfectly, he is a little annoyed and in disbelief a colleague would not make sure his test results and instructions were completely understood) Really?
DAD: E uszed lotta worz I donna kno. I nee a medacine di-shon-airy.
Me: (smelling something funny and getting REALLY annoyed) Maybe you need to switch doctors Dad.
DAD: Aiyyyyy....no, no, no, hijita. I jus nea Doc Eche to splain.
Me: Dad, why would the doctor not take the time to explain this all you and make sure you understand?
DAD: (waving me off) No, is ok. Don worry. Is ok.
Me: No Dad, you need a doctor who will explain this to you. It's not really that difficult.
DAD: No, is ok. Is my herror.
Me and Doc H: What? How?
DAD: Wen da nurse call me in, she call for Dr. Sal Sanchez. So, jou kno, I juss go wit her. Aiyeee, but den she tell de utters I'm a doctor! (he slaps his forehead and holds it there as if he has a headache)...Wat can I do?