The Road to Snobbery

It was hot today. I believe it was the hottest day of the year, at least the hottest day I've experienced here in our hometown. We've been doing a bit of back and forth from here to our retirement vacation home. Plus, we had a heat wave while Doc H and I were in Hawaii in April. Regardless, today was a scortcher.

As I opened my car door this afternoon, heat visibly wafted from the car. In a rush, I plopped myself in the drivers seat, turned the engine on, rolled all the windows down, cranked up the a/c, and touched the little button on my touch screen to turn on the driver's seat a/c.

Yes, my nifty car blows the coldest, crispest, a/c air right up my ass and I like it. As the air cooled my peaches all I could think was, "Thank God!" as I comfortably sunk in my seat and drove on to the grocery store to buy our organics.

Suddenly, my spine stiffened. The hair on the back of my neck stood at attention. I thought to myself, "Wholly crap. What was that? Thanking God for coochie air conditioning? Really? Who am I? Oh, my...I  sound. Snobby."

I decided right there and then I wouldn't tell a soul.

But, let me tell you, it doesn't take long for people to become accustomed to such absurdities. I'm not the only one.

Here, let me throw Doc H under the bus, too.

Let me remind you, Doc H was on a diet of powdered Hostess donuts, Yoplait yogurt, and frozen TV dinners when we met. He was a culinary misfit and deviant. His scientific mind believed in "calories in, calories out". Nutrition meant nothing to the Doc. Insane, I know.

When we met, we would happily frequent eateries such as Boston Market and Chili's. Then our finances began to stabilize and we began dining at more upscale restaurants to mark special occassions. We liked it. The food was yummy, fresh, and organic. Our finances continued to improve. If we weren't eating at home, we would eat out. We began scouring our area for fantastic restaurants. Our palates were shifting towards refined. We became "foodies".

But here's when I knew Doc H was well down the road to snobbery: 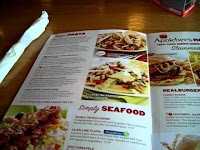 We found ourselves at the local Applebee's with all the kids. All six of us were seated reviewing our menus. Doc H and I were seated directly across from one another. While the four kids were chatting and/or bickering away, Doc H quietly called to me from over our brightly illustrated, laminated, and easy-to-wipe-clean menus:

Doc H: Honey?
Me: (still reviewing the menu and not looking up) Um-hmmm?
Doc H: You know... I really don't want to eat at restaurants with pictures on the menu anymore.

It's a slippery road. One I'm not particularly proud of...