Since all our kids spent the Easter holiday with their other parents, late Friday afternoon, Doc H and I high-tailed it out of town. We had a fantastic weekend. On our six hour drive out of town, we listened to music, talked about the kids, and laughed at all the funny messes they've been getting themselves into (but we had to be good parents and act disappointed-- it's our job). We spoke of our hopes for the future... what we hope to accomplish, both in business, work, and personally. We spoke of our hopes for the kids and where we see them going.


Since we had to travel out of town to pick up our "previously-owned" furniture, and after some prodding, we decided to make it fun. It was Easter weekend and we were solo; it became a "date" weekend.

The weekend was filled with good conversation, hearty laughs, amusement park ride screams, and the type of PDA we would never share in front of our kids.... they would gag. We spent two night in a hotel without any of our kids. Just Doc H and me. I can't quite remember the last time we found ourselves in such a position. I don't think he could either. We used that hotel room to its fullest potential.

On Saturday morning, as we were about to depart for the amusement park, I ran across this little drawing my daughter made for me when she was only four years old. 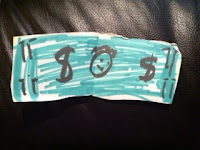 She made it for me after having returned home from a trip to the grocery store where she asked if I could buy her a bag of M&Ms. I had to tell her, "No, we don't have enough money for M&Ms". At a tender age of four, apparently she had heard that response too many times. Back then, it was my mantra. What's a four year old to do? She found herself some paper, a pair of scissors and made her mother some money, so next time, I would have the money to buy the 99 cent bag of candy. When she gave me the money I teared up, thanked her, and stuck the bill in my wallet where I convinced myself it would bring me good fortune by serving as a dismal reminder of what broke feels like.

On Saturday morning, as I was pulling some real money out of my wallet to stuff in my pocket, this special money fell out. Ten years later, I teared up again...balled, actually. Doc H checked on me; I re-told the story of the dollar. As he lightly rubbed my back, he reminded me those days are long gone and over.

We headed to the amusement park with our VIP tickets and had a fantastic time until we exhausted ourselves. I was incredibly grateful we could spend this time together and even more grateful we had the money to have so much fun and still have money in the account to purchase the furniture. Just a short decade ago, I won't have been able to pay for either.

We spent a ton of money this weekend and I would spend every dollar all over again. We were so busy, I didn't have time to shed tears over our childless holiday. We came home re-connected, re-energized, and happy.


PS. If you're wondering where the hospital was during the entire weekend, don't worry they were there with us. I know he snuck in at least one phone call from a colleague. Who knows what else went on while I was in standing in line for the ladies room at the amusement park.