Throw Me a LifeSaver {Coaches and Athletes Help Me} 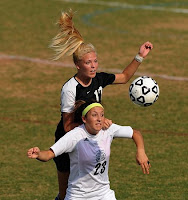 There is nothing more hurtful and cut-my-heart-out-and-stomp-on-it painful then when your child is heartbroken over a matter which you cannot understand yourself.

I spent yesterday grappling with the news that our daughter was cut from her high school sport team. She doesn't understand and, quite frankly, neither do I. When she first told me she had been cut, I thought she was joking. She said, "No joke." She then forwarded the email so I could read it for myself. In all honesty, I thought I would open it and discover I had been punked. I was praying for Ashton Kutcher to jump out from behind me. Ashton never showed up.

She was one of 5 girls who were cut. Ouch!

Here are my reasons for disbelief over this:
She has fantastic stats.
Last year, her scoring efforts pushed her HS team to a win in 3 games.
After the school season she continued playing via club where, in her best game, scored 4 goals.

Did she have any difficulties bonding with teammates? A temperamental personality that a Coach would not care to have on their team?
No. Both her high school coach and club coach both told me at the end of the respective seasons, she was a pleasure to have around. Club Coach even emails me to make sure she will be back again next season.

Here's why I think she was cut...
She was sick during tryouts. It was a three day tryout. She felt fine on day one. Tried out sick on day two, and missed day three. I did email the Coach telling her she wouldn't be at school and asking what would happen if she missed day three of tryouts. She said not to worry. She could finish tryouts when she returned to school. She finished up on Friday after the roster had already been posted.
This year the school has a new, young coach. Maybe she didn't review the stats from last year's team?

To add insult to injury, I was the mom the who brought drinks to the first game and organized drinks for the rest of the season. Not that such parental efforts should matter, but still...

So, here's where the heartbreak comes in. I had no words of explanation for my daughter. All I could offer was a trip to the mall for some retail therapy. That's it. That's all I had in my bag of mommy-will-make-it feel-better bag of tricks. Pathetic.

As the tears continuted to flow, I had no words to better the situation other than she could still play club and should turn her focus to next year's team. (But really, who has ever heard of someone being cut from JV and consequently playing Varsity? Anyone? Anyone?)

Anyone a coach out there? Any high school athletes?  I would love some advice!