It Was Her Job 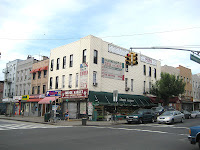 Every day she paced that street corner. It was her job, after all.

As she paced, she watched the cars come and go. Some cars were random, while others she could rely on better than her old, unpredictable Timex watch which still hung around her wrist with the help of rubber bands. She wondered where those timely guys hurried off to in their nice expensive cars. Those men must have important jobs. They were never the ones who pulled over and signaled for her to come to their car.

Most of her time on that corner was spent waiting or just walking back and forth. She had stared so hard at the sidewalk, she found patterns in the dirty concrete which transformed themselves into characters which kept her company as she paced and waited for her job to really start.

She had been walking this corner to that corner for almost ten years now. Every now and then, a car would pull over, roll down the window and ask the inevitable. In the early years, they pulled over more often. She was a feisty thing, denying her age to define her. The only thing stopping her from walking her corners was death.

Two blocks over her "colleague", had just met that fate after only 4 years of working the streets. She was happy it didn't actually happen on the street. No one deserved that.

While standing on her corner didn't provide the most lucrative income, it brought in enough money to almost cover the basics. That was all she could ask for at this point. She understood she was working her corners due to a chain of bad decisions she had made throughout her life. The heavy remorse coupled with a decade on the street had turned her sour.

A car pulled up and an older, scruffy guy motioned to her. As she slowly sauntered to up to his car down, he leaned over to manually roll down the window. No fancy car, no nice clothes, no GPS. As she bent over to talk through the window she felt her chronic back pain hit a new note.

"Hey! Tell me how to get to Highlands and Vista Green, will 'ya?"

Begrudgingly, she began dispensing directions to the directionally challenged. She knew she would be lucky if he parted with a "Thank you". Forget about any type of tip. Those who pulled over for her weren't usually the classiest of people.

She felt no guilt for abandoning the lost driver when she saw her John come walking up the street towards her. She could always count on him to be her first.

As he approached her, he smiled a bit and waved a little as she quickly returned to her corner. She returned the courtesy while grabbing her sign. She tried to ignore the arthritic pain she felt in her 80 year old hand and shoulder as she prepared to lift the heavy thing.

As the light turned green and she looked left and right, and walked halfway through the intersection with little Johnny while holding up her big, red, STOP sign.

Trying not to be such a grump, she said, "Have a good day in school, Johnny."

Yes, he would. She would be waiting on the corner just as she did every day. It was her job, after all. Email ThisBlogThis!Share to TwitterShare to FacebookShare to Pinterest
Labels: fiction