Play It Again {My Dad is a Doctor, But He Knows Nothing About Medicine} 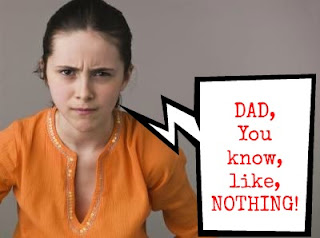 I am beyond perplexed.

Obviously, the teen female brain has evolved (I'm not even sure if that is the right word here) since I was a teen. At first I thought it was just me, so I consulted an expert in this field - my mother.  She readily agreed- she was perplexed as well. She confirmed what I already knew... I was nothing like that during my teen years.

I found myself shaking my head in disbelief the other night in the car. Here's what went down:

(Little Buddy finally can't take it anymore. He chimes in.)
LB:  TEEN SISTER! He's a DOCTOR! He should know! You're not alway right!
TD:  LB, you don't know what we're, like, even talking about! Mind your own business!

Me:  TD, how can you argue with your father who has a degree in medicine?!
TD:  He's not right!
Me:  You have to learn how to be open to the possibility that you may be wrong from time to time and it's okay to say, "Thanks for explaining that to me."
TD:  Well, that's not right. (sulk, pout, texts away on her phone - probably to her BF telling him how stupid we are.)

We get home. Doc H comes out holding one of his med school textbooks.

Doc H:  Look, TD,  (he reads)..."Concussion affects only mentation, with return of consciousness moments or minutes after impact."
TD:  (rolls her eyes) Whatever, DAD!
Me:  TD, just soak it in and you can teach your cheer friends the difference next time it comes up. They'll think you're so smart! (trying to be positive and upbeat)
TD:  Whatever, it's not like they really care about that anyways. (stomps upstairs)

Dear God, give me patience...

Medical Monday Blog Hop Is This Monday!
Spread the News!