'Tis the Season, folks, and it kicked off for us this past weekend in the form of the Surgery Department Christmas Party. 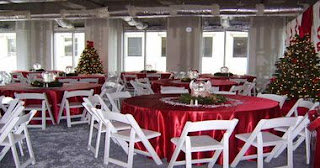 Same party, same people, same games, every single year. The party is so repetitive, I decided to pull a "Kate Middleton", and recycled the same outfit I wore to this shindig in 2007.  I just wasn't excited enough about the event to shell out a few hundred dollars for a new doctor's wife costume.

Lucky for Doc H, I have a sense of humor about these types of things.

I busted my butt to make sure we were on time. I skipped out on L2's cheerleading competition to make sure we had our White Elephant gifts. I shaved, bronzed, painted, primped and shellacked myself into a completely imaginary (read: delusional) version of Jennifer Lopez. This delusion works for me. Just go with it, won't you?

We arrived at our destination twenty minutes late. As we walked toward the banquet room, I spotted a gentleman manning the door who looked like he could just as well be hosting a holiday party for the Hell's Angels. My gut just about popped through my two pairs of spanx. I figured we must be at the wrong restaurant.

I knew this wasn't good as I stood back and watched my divinely dressed, handsome man question the weathered maverick sporting the grey handlebar mustache.

With a a comical glare, raise of my eyebrows, roll of the eyes, quick flip of the wrist, I mumbled out..


and began laughing at my husband.

Upon realizing his mistake, Doc H tried to play it off as no big deal. I reminded him we could've been home watching the end of the football game, or he could've taken a nap to make up for his continual lack of sleep, and more importantly, we told the kids we would be home for dinner. Now I had to call them to see if they could scrape together twenty bucks and call for pizza delivery.

In an attempt to make his bad better, the poor man resorted to what he only could to remedy such a situation.

So, we did. And there, dressed in our inadvertently matching black and red, dressy outfits, we drank our margaritas and caught up on all the past week had to offer. We shared the shannanigan's of our kids, his colleagues, a little business here and there, remembered past Christmas parties we had attended, and even laughed at our exes a bit.

I cherish that window of time we had together. It was almost the best part of the Surgery Department Christmas Party.

Come back tomorrow and I'll share the BEST part of the party...