Excuse Me, But What Just Happened?

Doc H and I sitting in our favorite Mexican restaurant. We are separated from another couple via a short wall and a restaurant privacy screen. We can hear their conversation if we strain our ears, but lucky for them, we're not nosey kind of people.

So, one margarita into the meal, we found ourselves discussing Doc H's latest hospital drama (because, you know... there's always hospital drama). We were chatting quite fervently until our conversation died an immediate death, our eyes locked, and we both stopped chewing on our chips. We leaned towards the privacy screen.

"Did you hear that," I whispered.

"What did you hear?"

Trying to inconspicuously peer through the privacy screen Doc H says, "Yeah, me too, but I have a common name" trying to brush it off.

I don't know who he was trying to kid. I've had to google Doc H a couple of times and have never come across another doctor by the same name in our area. Elsewhere in the country, yes. Here, no.

With the possibility of a patient next to us, we hunkered down, chewed as quietly as possible and kept the conversation at a minimum, trying camouflage ourselves among the chips and margaritas.

Shortly thereafter, Possible Patient's conversation took a bad turn.  One second, Doc H's name was mentioned, the next, obscenities started to fly. Possible Patient's dinner partner (his wife? mistress? girlfriend? who knows?) started calling him every name in the book. You know the names... 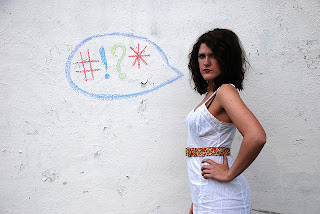 Just as we finished paying the bill and were ready to leave, Possible Patient's dinner stood up and said something to him that I couldn't quite hear. She left and he sat, presumably waiting for the check.

As Doc H and I reached the freedom of the parking lot, he was able to speak freely, "Did you see that?"

"She just told him he was a effing a$$hole and she was leaving!"

Just then, I noticed her driving right past us as she exited the parking lot, so I point out, "Well, there she goes..."

Yeah, it sure was.