When Medicine is the Family Business 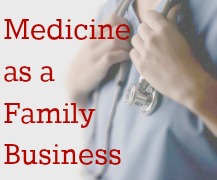 Over the last few days, I've had the pleasure of visiting with an older family friend who has always lived a life entrenched in the foxholes of medicine. To say I learned a lot from our conversations would be a ridiculous understatement.

You see, she was born into medicine. Ellie is the daughter of a physician-- the former Dean of a big name medical school. Medical school buildings across ivy covered campuses are adorned with her maiden name.

Ellie's childhood was overshadowed by her father's career and accomplishments.

And, yet, Ellie did like many of us girls do... she spent her teen years promising she would never, ever marry a man like her father. Yet, after graduating college and nursing school, she did just that. Ellie married a man much like her father... a doctor.

Apparently, she believed being married to a doctor would be different then being the child of a doctor. As time passed, she grew to understand the world of medicine is a consuming world no matter what role you played in it.

And while it may be of no surprise to outsiders that one of Ellie's sons felt the urge to continue the physician lineage, she was dismayed and displeased to learn of her child's aspirations to attend medical school. "It's not the life I wanted for my son. It's so demanding and constraining..." she said.

Despite her best efforts to talk him down from his jump into the medical school pool, she finally agreed to support his decision... on one count. He had to serve two years in the Peace Corp. Ellie was convinced he would see the world and return home with a different outlook and new appreciation for what our world has to offer outside a hospital or research lab.

Now, in the midst of his fellowship, and just a few short months of becoming a newly minted Attending,  Ellie realizes sometimes medicine runs deep in the veins of some families...such as her family... and, now, with our own daughter's medical school aspirations, perhaps our family, too.

"There's not a darn thing you can do about it. Apparently, medicine has become our family business."