It's Not Watergate; But It's My Gate

I've been bombarded. We just received word that our patent is through the first hurdle and it has now been published. I now feel completely under the gun to get the website running, and our SBIR grant application submitted before the April 5 deadline. I ran away yesterday in an effort to solely focus on the task at hand. I left the kids, the dog, and Doc H for a week. Thank God for my mother who is shuttling the younger kids around for me. I left the kids with enough money to order pizza every night for dinner in case Doc H can't leave the hospital in time to get dinner for them.

I drove to our vacation home, where I was greeted at the gate by the painter. He explained the painting process to me and I learned the gate was to be finished in a patina I was not made privy to. So I call Doc H. He's in surgery. Wonderful. Finally talk to him at 10pm (he was still in the hospital), and we get into a raging argument over the stupid gate. I know (despite the fact that I'm going to try to love it) I'm going to hate the gate. I swear if Doc H reaches the pearly gates before me, the first thing I'm doing is pulling that gate off the hinges! {Sorry, Honey, but that's a truth.}

So, to I did my best to relax, by taking a soak in the hot tub and drinking an awfully pretty martini with my dinner.

Now, the painters are back. Do I go out and stir the pot with the painter and tell him how I would like things done? Or should I just let it be? Is a gate simply worth the trouble and upheaval? It's just a gate, right? So why does it matter so much to me?

Last night before I went to bed, Doc H told me I need to get over it. I know what he was referring to... I need to get used to these changes in our life brought about by the acquisition of the first start up. We are no longer the kids who grew up in modest, middle class homes. We are adults who have experienced some great success. I need to learn how to embrace our success and not be embarrassed by it.

The Truth As It Is

Sometimes spouses argue over important things: how to manage the finances, how the kids should be disciplined, what's an acceptable number of times sex is had per week. That's the stuff that matters to matrimonial harmony.

And then, other times, we argue over the insanely stupid. The stuff that really doesn't matter. Such an instance happened to us two nights ago over dinner and margaritas. We argued over the discrepancies in... our pipe dreams.

We drove home still debating any random thought which derived from the differences in our pipe dreams. Just for fun, I suppose.

Then, last night we crawled into bed and watched a bit of "American Idol". When this happened...
And, immediately Doc H pointed to the television saying, "That's exactly how you got with me last night!" I told him should be glad I've never sucked my own teeth at him like my Latina ancestors before me had done many a time to their dog-house husbands.

Then, this morning, I decided I should catch up on some of my shows as I scoured the web for grant funding opportunities. And, as I watched "Modern Family", I could only nod my head and laugh. For there was Sophia Vergara telling the God's honest truth...

Well... at least the truth as it is in this household.

You know you're a doctor's wife when
your mail looks like this... 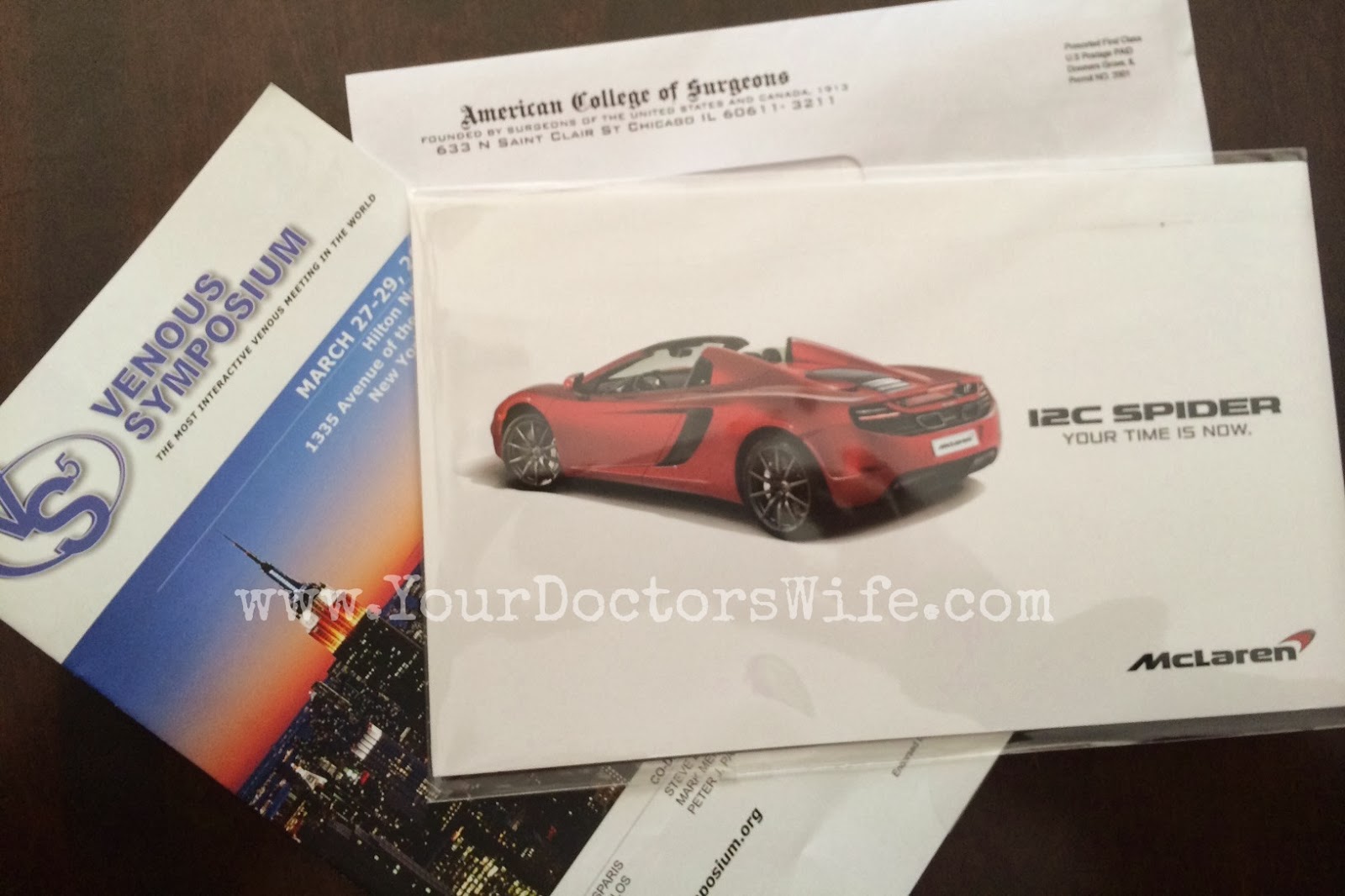 and you're not sure if you want to
laugh,
scratch your head,
sigh,
or
cry
.

Liked this?
Catch the previous editions of
You Know You're a Surgeon's Wife When..

Posted by Your Doctor's Wife at 3:24 PM No comments:

Email ThisBlogThis!Share to TwitterShare to FacebookShare to Pinterest
Labels: you know you're a doctor's wife when

Did you see that monstrosity of a game? Ouff!!

All six of us squished onto our sectional sofa in front of the t.v. munching on goodies and an early dinner while yelling at the players as if they could hear us. Thank goodness it wasn't until after halftime that I heard a vibration coming from Doc H's pants.

He spent the second half answering pages as the kids and I continued to watch the game solely for the commercials. My vote goes to Budweiser for the Puppy/Clydesdale Love commercial. What was your favorite?

Other than the commercials, I wasn't to into the game. If you ask me... the real winners are right here!!!

Are you confused if you qualify for the party?

If you have a pager interrupting your life... you DEFINITELY qualify!
Do you work in healthcare?
Doctor? Nurse? EMT? Chiropractor? Vet? Dentist? Therapist?
MA? NA? PA? DA?
Are you the spouse or SO of a healthcare worker/student?
Are you a nursing student? Medical student?
Intern? Resident? Fellow?

You get the picture, right? Come on, now... don't be shy! Let's keep growing and meeting new bloggers, so we can build a community of support and friendship, learn from one another, and share our stories.

Here are the rules:
Complete step one by following your co-hosts:
Want to be awesome? Help us spread the word by grabbing and posting the Medical Monday button on your post or sidebar...