A Blogger Derailed, or, What Brought on My Writer's Block 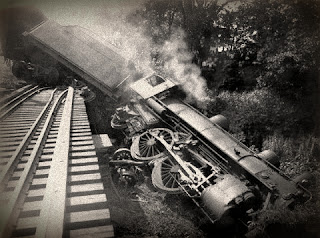 I started this blog January 12, 2012... almost 4 years ago. For two years I wrote religiously; little could stop my blogging habit. I had plenty to say and did so without regard. Never once, had I experienced writer's block.

Then, a funny thing happened- I discovered some of my daughter's friends (who were interested in nursing school), began following this blog and it's social media accounts the summer of 2014.

I panicked. My anonymity has allowed me to write the truth. Anyone close to us and who read the blog would be able to connect the dots.

I did what any sensible blogger would do. I blocked them and (temporarily) deleted the entire Beau Hunk series despite it being the most popular story line. I admit, it chipped away a little at my blogging spirit a bit, but I continued blogging. (FYI- as of 7/26/18 the series is back online.)

Then, in the Fall of 2014, a terrible thing happened- so terrible I said to the male voice on the phone, "This can't be real. Someone is trying to pull a prank on me. If you really are a Sheriff, give me your name and I will call the station and talk to you." I called the station. They connected me with him right away. It was all real, heartbreaking, devastating, confusing, and subsequently has driven a wedge in my (normally close-knit) extended family.

In early 2015, I spend more time sitting in a courtroom than any one person ever should unless you are employed by the court or are an attorney. There I sat, as my family was represented on both sides of the case. I was, and still am, Switzerland. I don't understand what happened. I don't have the whole story. I have so many unanswered questions. I don't know what to write. So, I wrote nothing and my blog went silent and for the first time, I fully realized I was suffering from writer's block.

Then summer of 2015, brought more heartache as we quickly and dramatically lost a beloved member of the family to lung cancer (she never smoked). Her passing brought on more issues, questions, and family drama. As that wasn't enough, because she was a bit of a public figure, we had to hold a public memorial attended by dignitaries and some high profile people. I spent the rest of the year accepting posthumous awards on her behalf. It was bittersweet, but also sucked the life out of me.  All this activity brought about a seat on a Board of Directors. I am proud and happy to be continuing her legacy. But, my blog still laid silent.

Then, my closest cousin, the one person who I can consider a sister, was diagnosed with stage 4 breast cancer. I was upset and angry; yet, I just stared at my blank post page with no words. My blog remained silent.

Then in April 2016, my father went to the ED with what we thought was kidney stones. I'm going to make a very long story short here... Whipple done, complications ensued. We spent eight weeks in the hospital,  in and out of ICU, time spent on life support, round the clock dialysis, liver function practically nothing. Medically speaking, my father should have died two times over. Doc H even claims his full recovery is nothing but a miracle. My father is a pancreatic cancer survivor! Yet, still, my thoughts locked up in my head, and my fingers froze on the keyboard. My blog was to remain dormant.

Then, one of our girls was admitted to the hospital with an infection. Doc H had the chief of every department working on her case. I can't tell you how crazy it makes them all when they CANNOT figure out the cause of an infection. I spent another week in the hospital at her bedside (with her mother!). Surely, that would open the locked blogging gates- but, no- I still could not write a thing and my blog laid in its own type of life-support.

Then, one of our son's (he's in high school now) classmates and friend died in a horrific car accident right after school one afternoon. I can't even think about that tragedy. I will never write any more on it.

Then, the day of the election, we learned my beloved sister-in-law was ill and had been admitted to the hospital. Next day, we are told she has stage 4 (aggressive) breast cancer. She is receiving treatment and with broken hearts, we pray for her.

There is more, but I cannot write it. This is enough. I am trying my best to revive this blog and overcome my writer's block. I simply don't know where to start. There is so much compiled in my brain. But, this is a start.